BalloonStormers, Inc., was started by Gary  and Jan Sines as a part-time hot air balloon company in Jefferson City, Missouri. They opened another office at the Boone County Fairgrounds in 1993 and the next year consolidated both operations. They now store their balloons in Ashland and primarily fly in Columbia.

Gary has over 45 years of experience as a hot air balloon pilot. He received his pilot license in 1972 after training with pioneer balloonists Tracy Barnes and Dodds Meddock. He received his commercial license later that year and, with Jan, opened a full-time balloon company and did commercial balloon promotions and exhibitions in over 15 states. They became an authorized dealers for The Balloon Works, a North Carolina based balloon manufacturer founded by Tracy Barnes. Gary received the Ed Yost Master Pilot award.

In 1974 Gary and Jan opened the Kansas City balloonport where they sold new and used balloons and gave balloon rides. The company also repaired balloons, trained new pilots, and organized balloon races. After moving to Jefferson City, they opened a chiropractic office and continued to balloon on a part-time basis until opening the Columbia Balloonport 1994.

Gary has logged over 2,000 flight hours and earned the Balloon Federation of America Distinguished Aeronaut Award. He has flown throughout the United States and in Mexico and Costa Rica. He was nominated in 1997 and 1998 by Governor Mel Carnahan to represent the state of Missouri at the annual Governor’s Cup Challenge in Mitchell, South Dakota. Gary finished 1st place in 1998 and 2nd place in 1997.

Jan was the first woman to receive the Ed Yost Master Pilot award, received the BFA Distinguished Aeronaut Award in 1974, and placed 2nd in the 9th Ladies World Cup held in Chez Charon, France. She has been ballooning since 1972 and took her first balloon ride, in their first balloon, with Tracy Barnes, founder of The Balloon Works. Ballooning highlights include landing in a castle in France, flying over the Pyramid of the Moon, north of Mexico City, and flying in Inner Mongolia, China.

Gary and Janice have experience organizing balloon races, rallies and balloon glows. They serve as balloonmeister for the event, invite the pilots, verify their paperwork, schedule the flights, and offer prizes for the top finishers. You get the entire package for one fee.

We manage corporate hot air balloons that are used to supplement the marketing, advertising and public relations efforts for the individual companies. We make appearances with the corporate balloons at company events (picnics/grand openings/sales meetings), community events (picnics/celebrations/fund raisers), and balloon races. Over the years, our clients have included: a bank holding company, car dealer, oil company, television station, radio station, and a national cellular phone company. We also managed the hot air balloon which represented the U. S. National Hot Air Balloon Championships held in Columbia 1995 through 1997. The balloon was used at events throughout the Midwest to promote the event. During 1994 and 1995, we appeared with the balloon on the NBC Today Show with Willard Scott.

We offer hot air balloon rides and tethered rides for individuals, couples or small groups. Balloon rides last approximately 45 minutes to one hour and include a traditional champagne toast at the landing. Most of our aeronautical adventures depart from the Boone County Fairgrounds, but we also give rides throughout Missouri. Some of our unique flights have included wedding proposals, birthday, anniversary and retirement celebrations. Some couples have even exchanged marriage vows in the balloon.

Tethered rides are popular at company picnics and family reunions or wherever a group of people want to enjoy a short ride up and down in a tethered balloon.

Due to more favorable wind and weather conditions, we launch balloons at sunrise and within two hours of sunset. We can also do tethered rides after sunset or before sunrise. Although we fly year around, our busiest season is May through October. We have balloon ride gift certificates for sale – great for birthdays, anniversaries, and to check off that Bucket List.  Advance reservations are required. 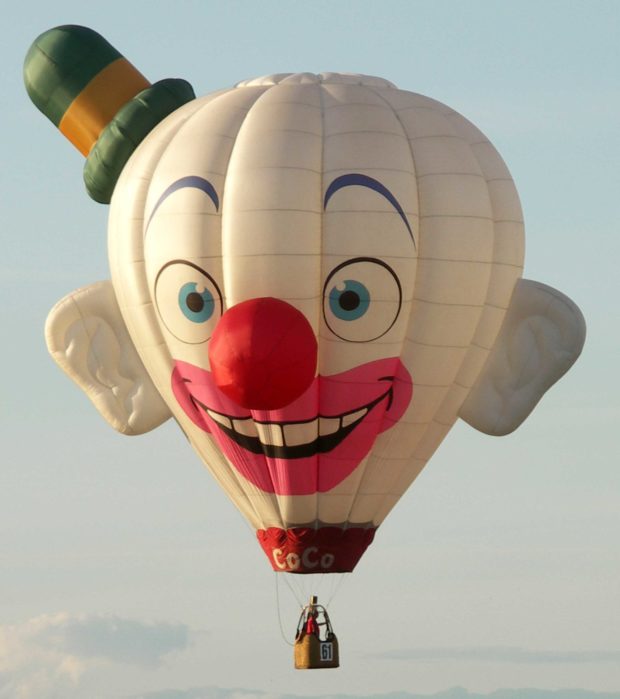 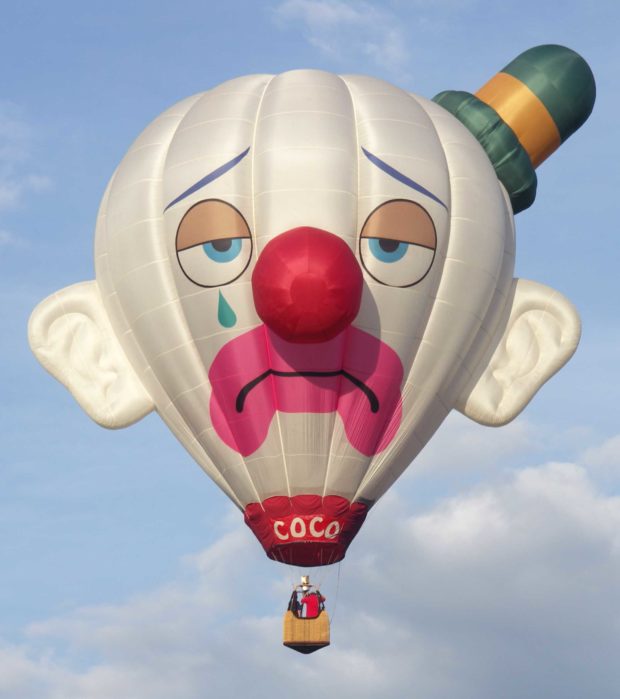 In June of 1996, BalloonStormers purchased Coco the Clown, a custom-built special shape balloon. Coco is a BalloonWorks FireFly 7B and stands over 75 feet tall. As he spins in the sky, you can see both sides of his personality — happy and sad. He even has advertising space available on his skirt banner. Coco can be used for passenger rides, balloon glows, or tethered rides. Coco has traveled to Inner Mongolia China, Indiana; Illinois; New York; Tulsa; Longview, Plano and Mesquite, TX; the U. S. Nationals in Columbia, MO; the World Championships in Battle Creek, MI; and the Kodak International Balloon Fiesta in Albuquerque. He has been featured several times on the Official Special Shapes Poster at the Fiesta and has appeared on the Weather Channel. 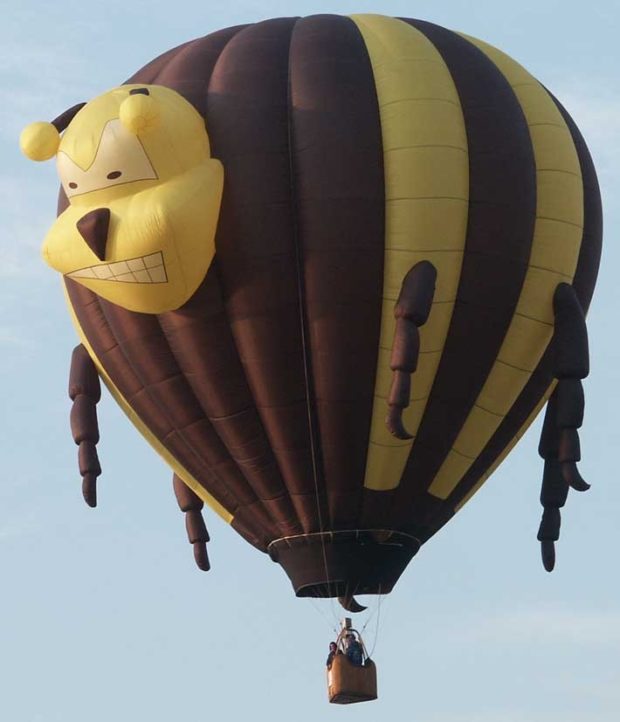 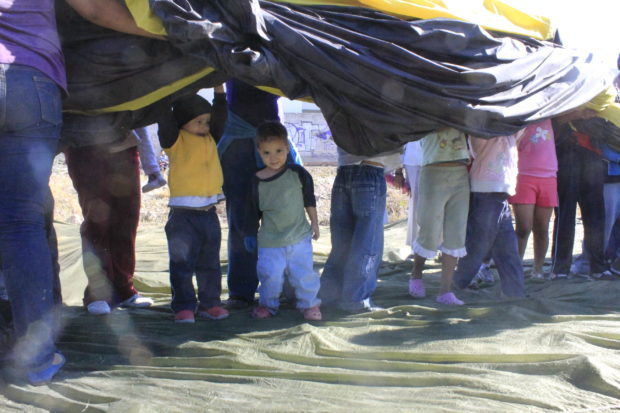 Buzzy the Bee is know as ‘The Bug’ in Leon, Mexico where it has flown for many years. One little boy in Albuquerque, NM came running up announcing that it takes 30 million bee hives to make one Buzzy the Bee. Buzzy is a BalloonWorks FireFly 7 and has advertising space for a banner under his face. He travels often with Coco the Clown and/or The World’s Biggest Gumball machine. 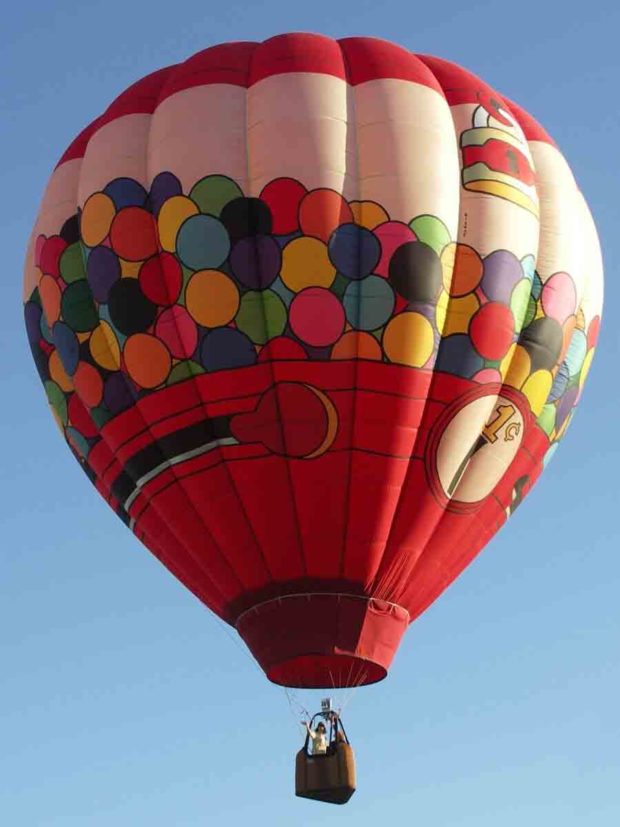 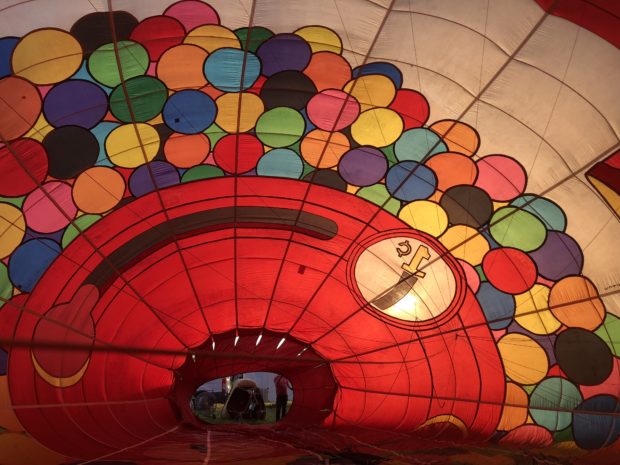 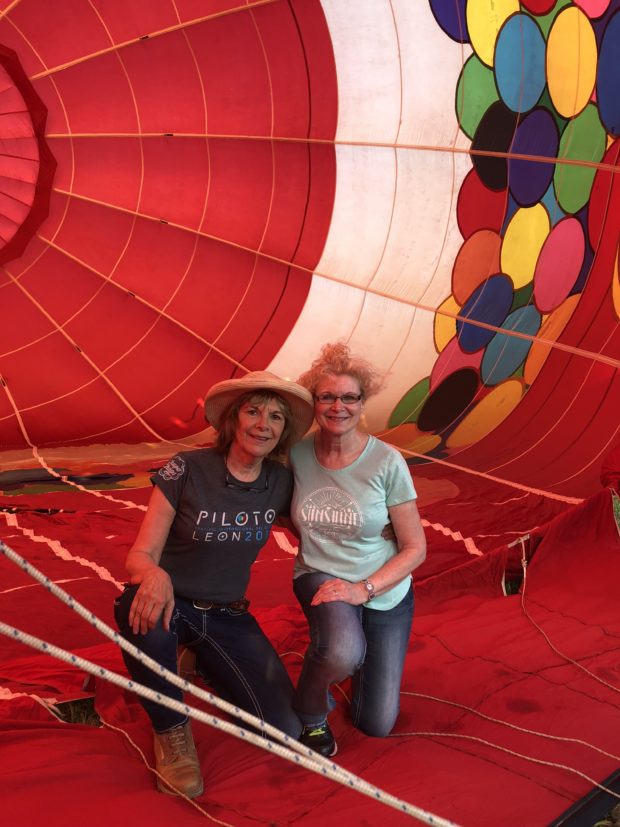 Gary Sines has trained over 50 pilots during his career. We provide pilot training for the private and commercial lighter-than-air pilot rating and conduct periodic ground schools for student pilots and crew members.

Training requirements for a private certificate consist of a ground school and written exam, ten hours of flight instruction, and a solo flight. All training is based upon the FAA Practical Test Standards. Once these requirements are met, the student is ready for the flight check ride and oral exam administered by a FAA Designated Examiner.